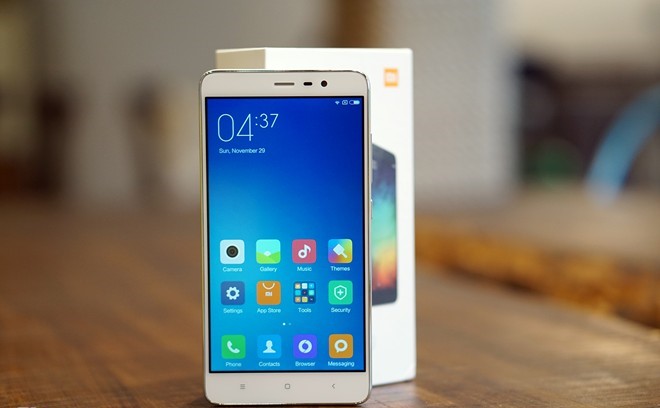 Today we will review the one of the best China phone brand Xiaomi and nice and cheap phone Xiaomi Redmi 3 Pro. Las week we bought this phone and now testing for week or so.  In first impression this phone doesn’t seem like the typical budget smartphone.  It has extra features compared to the original Redmi 3. This PRO version has a fingerprint sensor has been included, and the internal storage and RAM has been increased to 32GB and 3GB.

In design section there is no major difference but the buttons have a slightly better tactile feedback and there are absolutely no moving parts on the device (the Redmi 3’s back cover moved a little bit if pressed harder).  But the first impression  of build quality is slightly better than the old and cheaper Redmi 3 version.

The size of Xiaomi redmi 3 pro is the tinniest and is 5-inch with i prefer most. Holding the smaller 5 inch form factor makes it easier to hold and definitely nicer as well due to the full aluminum build. The front has a lip all around the display for that extra little touch which complements the look of the phone. In terms of aesthetics,  the Xiaomi Redmi 3 Pro does not even shout out budget at all.

Xiaomi Redmi 3 Pro comes with MIUI 7.2, which is built on top of Android 5.1. Hopefully, Xiaomi the original Redmi 3’s is already in beta as well so it shouldn’t be too long until it gets updated.

The UI looks the same as on any other Xiaomi phone. As usual, there is no app tray and all apps sit on the home-screens.

Redmi 3 Pro has bumped it up by 16GB to 32GB storage. It’s a bonus since the Redmi 3 Pro has support for SD card up to 128GB by using 2nd SIM card slot. The RAM has also increased to 3GB, which means more multitasking and better memory management.

The Xiaomi Redmi 3 Pro has a huge 4100mAh non-removable battery and it performs just like the regular Redmi 3.  In short, battery life is fantastic. I could not squeeze the battery out in one day even on heavy usage that involved gaming, installing lots of apps, watching a lot of videos, taking pictures, browsing the web and so on.  My usage was emailing, surfing net, messaging using 4G and heavy youtube watching on WiFi when I get home. Brightness was at 60% throughout the day and by the bedtime, the Redmi 3 was around 15% – 25% when plugged in. I’m impressed with the battery performance and I didn’t have to worry much about my phone battery getting depleted.

Charging time from flat to 100%, took about close to 3 hours with the supplied charger which was quite decent.

The back Camera has a 13 MP shooter and in the front is a 5MP camera. Shutter speeds are decent but photos tend to take longer to process in HDR mode. The only downsides are that sometimes there is a softer focus on the corners and the dynamic range was off in a few shots. But of course for better pictures you need special app.

Conclusion – the Xiaomi Redmi 3 Pro is a very solid device and it is very hard to beat it in this price range. Build quality was above average with the metal construction  and fingerprint sensor. So this is great  and affordable smartphone.

Seiko Prospex: Everything About The Save the Ocean Collection