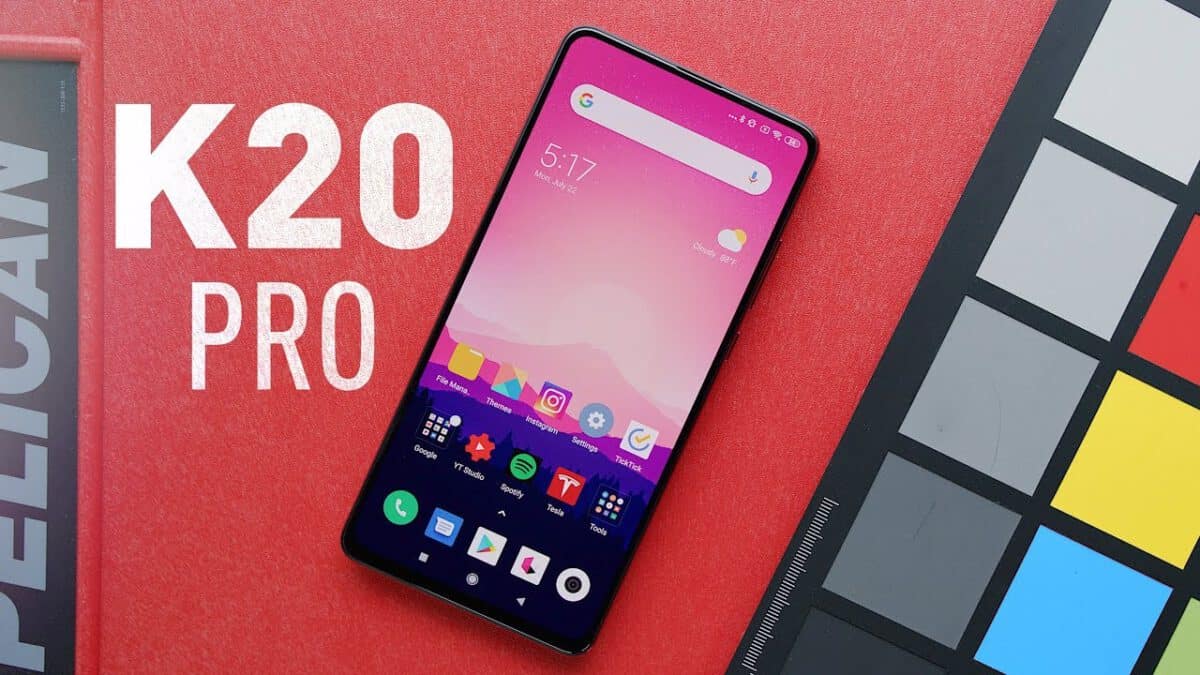 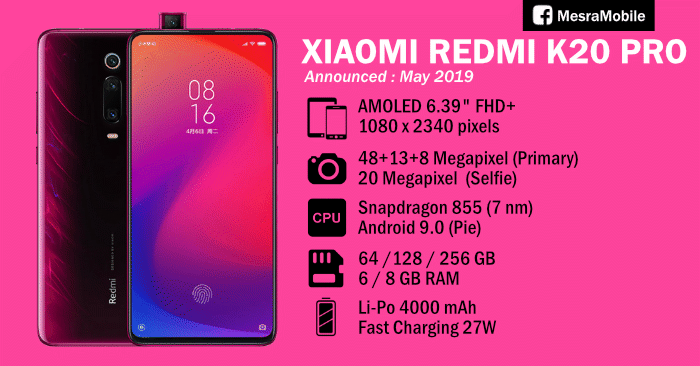 Xiaomi Redmi k20 Pro deserves the attention is getting because it legitimately tries to include literally everything you could possibly expect out of a flagship. But out of lower price now it’s not all the highest-quality it definitely has a quantity. It has almost everything but it’s still a 400 dollar phone. 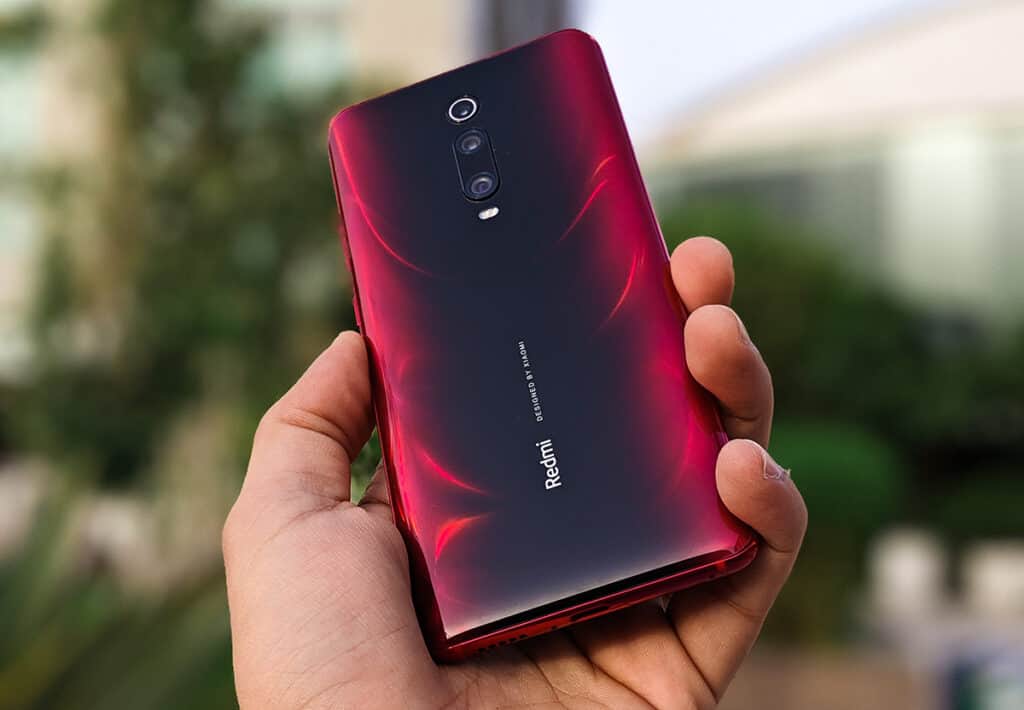 So first of all it’s pretty unique looking with the colors sort of dancing down the sides and then depending on how the light hits it this shimmery pattern changes it’s pretty cool. But it’s actually also still glass and still a fingerprint magnet but this thing is already starting off. With a leg up you typically expect budget phones to have plastic and cheap materials this one is legit metal and glass.  USB type-c you got it a slight curve to the bag glass you got it; headphone jack –  you got that; a full-screen display from top to bottom thin bezels you got it; pop-up selfie camera you got it; a built-in LED light fingerprint reader underneath the glass you got that too;  four thousand milliamp power battery you got that; Snapdragon 855 it’s all here. Pretty much the only hardware thing this guy is missing if you’re comparing it to flagships is water resistance and wireless charging.

So you know it is a glass back with no wireless charging.  I’ve said before if you’re gonna do that just go with a high quality plastic so you avoid being breakable. But oh well so like I’ve said the list of things that this phone has as you’ve heard is kind of amazing. But the actual quality of all these different things varies not all specs are created equal. 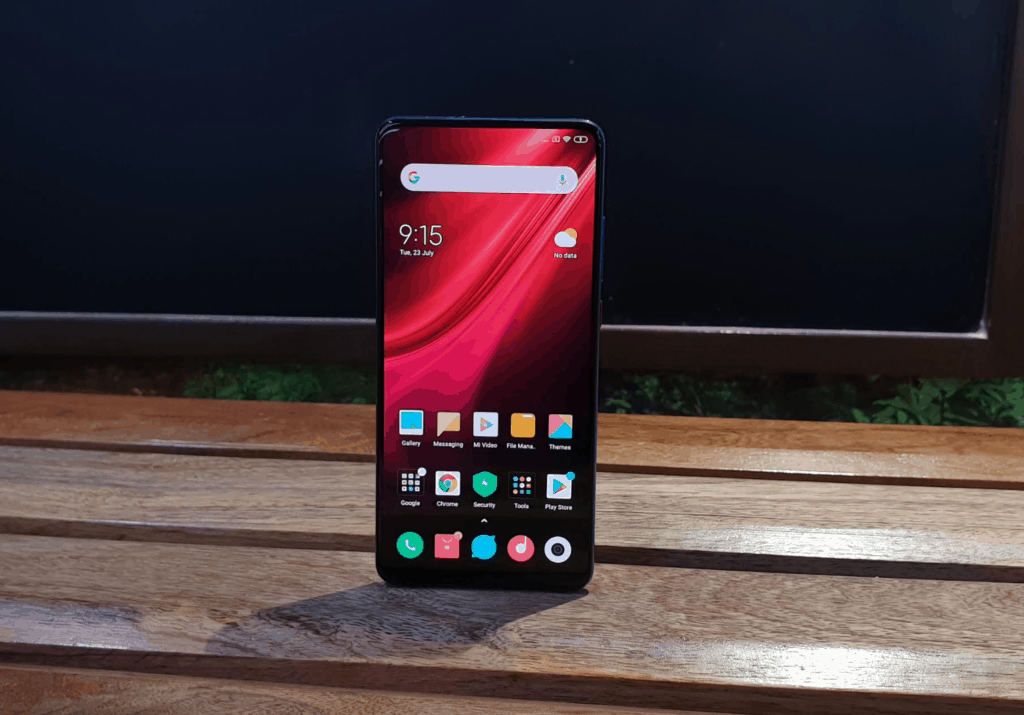 The natural place to start as a display and it’s pretty nice to be honest. It’s a six point four inch 1080p AMOLED . No notch thin bezels and it’s pretty bright its visible outdoors with fairly decent colors. Maybe a little big if anything but we’re so used to seeing so many budget phones with either big chins and big bezels or smaller screens or notches. This one’s just clean and it’s flat so I’m reminded again of how much I liked this versus the displays that sort of spill over the sides/. So I really like this screen to me this is the best display in any mid-range phone. And then underneath that display glass there is a fingerprint reader which again that’s pretty impressive for a mid-rangeer. At the fact that it’s there in the first place but this reader itself it’s not that fast so you can kind of get used to it. It’s a little bit of a delay when you press it but it’s in this weird place. Where it’s slower than most other in glass fingerprint readers on great phones. Also slower than the capacitive ones are used to but at least it’s cooler.

It’s under the screen. To achieve the full screen design pop-up selfie camera and this one has a light on it I don’t know if that achieves anything other than looking kind of cool. But the mechanism is decently fast. It’s rated for 300 000 opens and closes. You can’t use it for RGB face unlock. But I don’t recommend that and it even has automatic freefall detection so if you’re taking a selfie and you drop the phone and it has a freefall it actually closes the camera app and shuts it to avoid damage. If it lands on it but a low-key pretty important part of it is that light in the selfie camera actually shines through the top of it so it can act as a sort of a notification LED. You can see if you’re plugged in and charging it lights up to tell you and when you’re finished charging. That changes really the only thing I don’t like about this selfie camera is the photos. It takes which are straight garbage like this is possibly the worst selfie camera. I can remember using since I started to review phones there’s absolutely no dynamic. Range colors are pretty terrible : very very soft details.  I just don’t know why it’s this bad but you know what makes it even more crazy how good the back cameras are this k20 Pro. Again has yet another flagship looking spec an array of triple cameras on the back a 48 megapixel main camera an 8 megapixel telephoto and a 13 megapixel ultra wide. So that main sensor is a Sony it’s an amx 586  it’s the same sensor that we’ve seen in a couple other honor and vivo phones. That have performed pretty well it’ll shoot 4k 60fps video with any of the camera lenses so yes you can shoot video with the ultra wide camera . It’ll even shoot 960 FPS slow-motion.

Technically on paper it has all those things you’d expect from a flagship. Snapdragon a 55 six or eight gigs of ram and up to 256 gigs of storage. It’s running MIUI 10 on top of Android.

For this price Xiaomi Redmi k20 Pro is a great phone, good looking, quality and etc, but has a minus for camera. If you are not a selfie shooter you can have this phone for sure.

How to Install Google Camera on Xiaomi Mi 8

Mobikin: The Best Assistant for Android