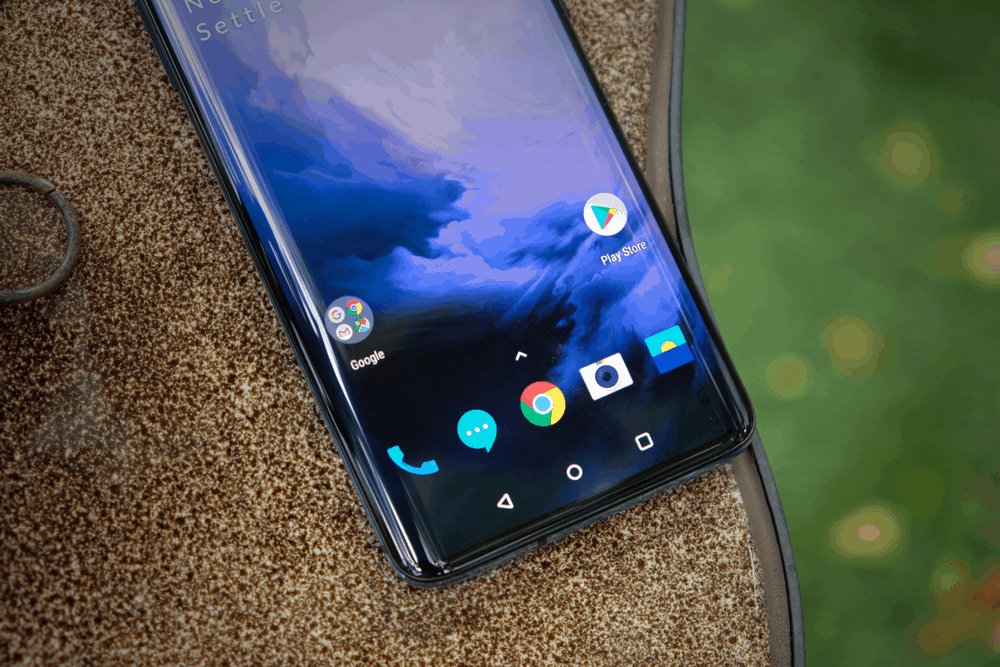 OnePlus 7 Pro the phone that is no longer a flagship killer because it now costs like a flagship. In fact I paid about 800 euros for the top-shelf model with warping 12 gigabytes of RAM and 256 gigabytes of storage. On the other hand the basic model of the OnePlus 7 Pro  cost about 660 dollars and  yes is still cheaper than $1000 devices out there. But it brings bleeding edge specifications one of the best displays on the market and much more!   I’ve spent more than two months with this device and here’s my review  for the OnePlus 7 Pro smartphone.

The design of the phone is great although the OnePlus 7 Pro  ooks very similar to most of the flagships out there. However there are some key differences. The phone uses motorized selfie pop-up camera meaning that there are no notches. It’s still works well after two months of usage excuse not only for selfies but also for face unlock. The latter feature works well most of the time but does not always like my glasses which is a little bit annoying.

The display is another key feature that makes the phone stand out it’s called fluid AMOLED because of its 90 Hertz to refresh ratio. In practice the screen just feels super smooth and fluid. You simply have to see the screen yourself to see the difference. The overall display quality is top-notch.

There is a fingerprint scanner under that beautiful display. It has improved a lot since the official launch and right now I can say it’s really fast and accurate. In fact it might be the fastest under the display fingerprint scanner we have on the market these days!

I didn’t scratch the glossy metal frame of the phone because I used the case from time to time. The gorilla glass fiber tected backplate has a nice matte finish.  Meaning that it is less prone to fingerprints smudges and scratches the phone. This phone is not officially water resistant. Even though with the company claims it can survive accidental splashes. However I decided not to test this feature without the official ip68 certification.

A signature notification slider is still here and I love it. There is no headphone jack but the music streaming quality via the Bluetooth has been really good. The dual stereo speaker system is powered by Dolby Atmos it’s really good overall. But it’s not on pair with a speaker system of the Samsung Galaxy S 9 +.

If you buy a top shelf model with 12 gigabytes of RAM and 256 gigabytes of storage like I did you’ll have the peace of the phone in terms of sheer power those killer specs translate into excellent gaming performance. No matter what games you play the oneplus 7 pro will just fly the phone.  Oneplus 7 pro  also has an integrated cooling system that helps the phone stay cool. To the touch there is also a dedicated gaming mode that boosts the overall performance. For example I played the pop G for hours using the very highest graphic settings and the overall performance has been excellent.

Oxygen OS is an excellent choice. It’s been polished so well throughout the years that some may say is even better than Google stock Android found on the pixel phones. There are plenty of added features but no bloatware. And head speed the phone has been smoking fast for the past couple of months you can run all the apps you want at the same time and the phone never lags or stutters. In the other words the oneplus 7 pro is easily one of the fastest phones I’ve ever tested.

On paper the oneplus 7 pro has one of the most powerful camera setups. Also the phone received plenty of software updates that address the image quality. In practice pictures taken with this phones look beautiful. There is a lot of detail colors are nice and in general these are one of the best-looking images. However once you compare the quality side-by-side with some flagships like the samsung galaxy s 10 plus the samsung phone is more consistent and it produces slightly better looking pictures. That is especially noticeable when you take pictures using the wide angle lens. Some of the images came out a little bit soft from the oneplus device southeast and salty poor trees usually come out nice and sharp.

I like portrait image quality using the main camera too. However selfies taken at night do not look impressive at all.  I can say that the oneplus 7 pro is pretty good in low-light situations and it even has at night mode. Sometimes it can take flagship great photos but it’s still less reliable than the Samsung Galaxy S10 plus.

So I like the overall image quality 4k video shot at 30fps is really nice and sharpens table. Thanks to good stabilization 4k 60fps video looks really good too. But you lose the image stabilization unfortunately you cannot shoot videos with a wide-angle camera. Which is really frustrating.

All the time You can also find all the sensors you would ever need on a smartphone. The battery life has been pretty good too. On average I was able to get about 6 or 7 hours of screen on time. If I use the phone mostly for video I could get almost 12 hours of SOT. The supplied 30 wat warp charger fully charges the phone just about 1 hour which is one of the best results in the industry.

So there we have it the Oneplus 7 pro after using the phone for two months I wouldn’t call it a flagship killer. It’s now a legit flagship smartphone with great design, excellent overall performance, amazing ninety Hertz display and great cameras, good battery life and much more! The only downsides are that you cannot shoot the videos with a wide-angle camera which is really frustrating.  I also wish the sound quality during video recording was better. On the other hand the oneplus 7 pro is a fantastic phone. Sure it is not a cheap device anymore. But I think it’s still one of the best overall packages at the starting price of 660 dollars