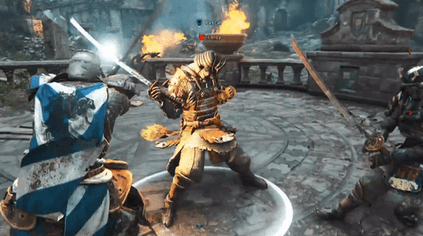 You might not expect it, but the world of mobile phones actually makes for a pretty good medium for fighting games. We’ve seen a number of the biggest fighting game franchises make their mark on the mobile market, with Street Fighter, Mortal Kombat, and Injustice all included. But given how well these games work on small screens with simple controls, there would seem to be plenty of untapped potential beyond these top franchises. So without further ado, here are a few fun ideas for additional, brand new fighting game concepts that could be all kinds of fun on mobile.

We’ll start with a concept we’ve actually seen in some form or fashion not too long ago. Ubisoft’s For Honor title pitted warriors from different lands and time periods against each other in head-to-head combat, but it didn’t quite scratch the fighting game itch we’d been hoping for, and ultimately revolved around a disappointingly narrow range of ancient warriors (Vikings, Knights, and Samurai). A similar game with more variety, adapted onto a 2D plane and designed for mobile play, would make for an endlessly entertaining fighting experience. Frankly the PS3 and Xbox 360 game based on the ridiculous (but admittedly fun) series Deadliest Warrior might be the closest to what we’re looking for. It just wasn’t good enough, and it wasn’t on mobile.

Also read: How to Fix PUBG Mobile Device Not Supported

It’s actually shocking when you think about it that the Greek and Roman gods and heroes haven’t headlined a major fighting franchise yet. They’ve been in games here and there, particularly in recent years in fact. Several of the modern casinos, with their ranges of bonuses and typical gaming formats, have actually begun to showcase interesting animated arcades, including a whole “Age of the Gods” slot series. There is of course the God Of War series on PlayStation, and Gameloft even released a “Gods Of Rome” mobile fighting game somewhat like what we’d imagine. That game, however, was bogged down by extraneous characters, clunky mechanics, and over-the-top animation. What we’d love to see instead is a crisp, pretty game infused with famous gods and heroes and taking advantage of all of their powers and traits. This, plus beautiful settings from Ancient Greece and Olympus, would make for an amazing game.

This is another classic, readily available concept that feels ripe for the picking. Just about all of the classic cinematic monsters are available in the public domain now, including the likes of Dracula, the Wolfman, and plenty of others. With this kind of colorful cast of known characters, together in one title, the right developer could come up with a fighting game that would feel as fresh as it would be fun. Plenty of people would be very excited to have the Mummy beat down on the Invisible Man, or stage a battle between Dracula and Frankenstein’s monster. Plus, given Universal’s failed attempt at a cinematic universe, it would be immensely refreshing to see some entertaining new media out of these characters.

With this suggestion, we’re officially out of the realm of games that could be made by just about any capable developer. But this idea is one that’s too good to pass up. Fighting games generally gather attention in one of two ways: having interesting, unique mechanics, or having well-designed or recognizable characters. In that second category, no company in the world can match Disney’s spectrum of characters. Think of it like a mobile version of Super Smash Bros., but with Mario, Donkey Kong, and Kirby replaced by anyone from Simba, to Mulan, to Mickey Mouse himself. There’s no telling how great and popular a game like this could be under the right Disney-hired development team.

How to Invest in Crypto Using a BTC to ETH Exchange