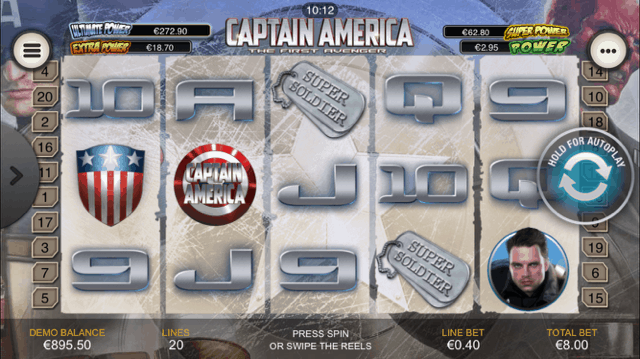 Playtech software developer has always been famous for high-quality gaming software. Each of game made by Playtech company is unique and inimitable. As a confirmation of this statement, the modern and the best among all slots online – Captain America, based on the comics from Marvel. Captain America is one of the most popular superheroes, which is why this mobile slot machine was waiting for success in advance. And since the film adaptation of this story, the army of fans of Captain America has grown significantly. Everyone who loves stories about super-heroes, about the struggle between good and evil, will appreciate this game. But those who are not aware of the Marvel game universe will surely like high-quality graphics and thoughtful design to the smallest detail.

Captain America video slot is no different from the most slots online made by Playtech. There are five reels and 20 paylines. But you should pay tribute to the magnificent graphics, which look incredibly realistic, video effects and transitions are superb. A large number of thematic game characters immerses the gambler even more in what is happening on the screen in this gambling game. Thanks to this, the picture somehow comes to life and retains the attention of the player from the first minutes. A pleasant series of metallic accents on the monitor screen positively affect the theme of the game. As game symbols, portraits of the main characters, card symbols, as well as medallions, emblems, keyrings, shield, Nazi cross, and the game logo were used.

There are several Wild symbols available in the Captain America mobile slot machine. Red Skull is suitable for all game symbols in red colors, and Captain America is suitable for symbols in blue. They can close prize combinations if you get enough such symbols. Scatter symbols are the logo of the game. Scatter on the screen of a mobile device appears randomly. There is also a bonus symbol – a character with the inscription Free Games. But to start the bonus tour wait for the appearance of Captain America on the first reel, the bonus symbol on the third, and the Red Skull on the fifth.

How to start a game

Before starting the game, you need to make bets and set the desired number of lines on a mobile device. You can rotate the reels with a Spin or Autoplay buttons. For the combination to count, a series of characters must begin at the left edge of the screen and form a combo sequence to the right. With several matching combinations, only the highest chain-combos will be counted.

In addition to numerous special characters, there is a bonus mini-game on the Captain America mobile slot machine. It is a free reel spin with various effects and bonuses. To get started, the player will be able to run the reels for free four times. After which he will have a choice of various functions. They are presented in the form of cells with random prizes. In each of them, there are additional spins, multipliers, special wild symbols and much more. This bonus round will continue until the mobile phone user hits the cell labeled Pick up or until all cells are open.